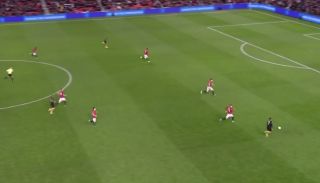 The sky is the limit for Brandon Williams.

If he keeps performing at this consistent level it won’t be long before Williams is considered for an England call up.

The young Manchester United left-back is that good and he’s only getting better each week. It’s important that he focuses on MUFC for now.

Gary Neville and Gary Lineker both sung the praises of Williams last night after his exceptional performance against Wolves in the FA Cup replay.

I like Brandon Williams. What I like about him specifically is he has that look in his eye of someone that would eat his opponents nose to win the match. Keep going kid! Oh he can play football to which is always a bonus 👍🏻

The more I watch Brandon Williams, the more I like what I see. Another exciting young English talent. 👏🏻👏🏻

The video below, courtesy of BT Sport 1, shows Williams bust a gut to get back and help his teammates in defence.

Pedro Neto, who Williams actually clashed with last night, was feed a through ball with yards of space to run into. The young Man Utd left-back sprinted back to reclaim possession and put United back on the attack.