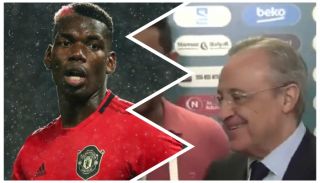 The president of Real Madrid gave a funny response when asked about Paul Pogba in an interview on Saudi television.

Asked about the Manchester United midfielder, who has been linked with a move to the Bernabeu, Florentino Pérez joked and, laughing, he commented that he did not know the World Cup winner.

The interview has been excited by Spanish media outlet AS and GOAL, using the following quote from Pérez: “I don’t know who Pogba is.”

It is believed that the emergence of Uruguayan Fede Valverde has cooled Real Madrid’s interest in Pogba — but with Madrid you never know with the Man Utd midfielder being a massive financial asset as well as one on the pitch.

Pogba recently underwent surgery on his ankle injury and will spend more time on the sidelines.

As long as the Red Devils use the money wisely in the transfer market, United fans are unlikely to lose sleep over potentially losing Pogba in the summer.

The Red Devils are being strongly linked with a January move for Sporting Lisbon playmaker Bruno Fernandes, as per the Telegraph, and maybe he can bring more creativity to Ole Gunnar Solskjaer’s midfield.

Well, all he has to do is stay injury free and show up in games.

Averaging a goal or assist in every league game the past two seasons, Fernandes certainly looks like a midfielder who could take Pogba’s responsibility in the centre of the park at Old Trafford.