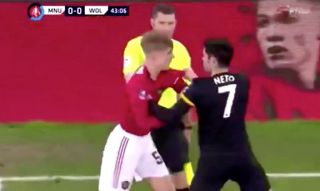 The young left-back doesn’t just perform well on a consistent basis, but he’s a fiery character too, and that is always a good trait to have in a defender.

Williams isn’t one that will get pushed around often. Tonight he showed why when he clashed with Wolves star Pedro Neto, who had an early goal controversially ruled out with help from VAR.

The incident, as seen below (footage courtesy of BT Sport 1), is a minor exchange we can only describe as ‘handbags’.

For all that is said about Wolves’ Adama Traore, Williams had him in his pocket again tonight.

Keep up the good work, lad!