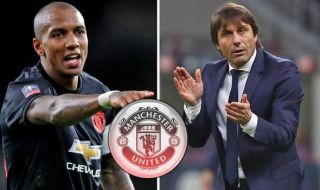 According to The Sun, Manchester United veteran Ashley Young is set to stay put this month despite being close to a transfer to Inter Milan.

It is claimed that Inter’s apparent swoop for Roma full-back Leonardo Spinazzola has ruined Young’s opportunity to make a switch to Serie A in the next few weeks.

The report adds that Antonio Conte’s side are in the process of making a straight swap deal with Roma for Spinazzola which would see Matteo Polintano go the opposite way.

Inter are making moves to finish the season strongly as they compete with reigning champions Juventus for the league title, a remarkable feat Conte achieved in his first seasons at Juventus and Chelsea.

Roma have even shared pictures of Politano undergoing his medical suggesting a deal is imminent.

Although he gets a lot of criticism from United fans, Young has been a reliable servant to the club since joining from Aston Villa eight-and-a-half-years ago.

The player’s professional towards the club has never come under question during his time at Old Trafford, but the manager must now reintegrate someone who hasn’t featured in a match day squad since reports surfaced — linking him to pastures new.

If Young does stay where he is, United risk losing him for free in the summer when his contract is set to expire.