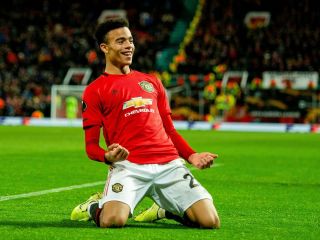 Harry Kane’s injury has come as a huge blow for Tottenham. The striker needed surgery after rupturing a tendon in his left hamstring against Southampton.

Now Tottenham manager José Mourinho has raised the possibility that Kane could be out until next season and miss Euro 2020.

England have other options in attack but it’s being without their main goalscorer that is going to hurt if he misses the European Championships.

At least for Gareth Southgate there’s Marcus Rashford. Given United are blowing hot and cold this season, Rashford is doing superbly.

Kane’s absence may lead to the big question — is Rashford better at centre-forward or out wide in a front three?

There’s also Mason Greenwood, the wildcard, who everyone is taking up at the moment.

I don’t recall seeing any better finishers at 18-years-old and it’s not that big of a surprise that people are suggesting he could make the England squad for Euro 2020.

Solskjaer was asked about the possibility of Greenwood going to Euro 2020 as part of the England squad. The United manager thinks everyone should let the teenager settle with the MUFC first team before we talk about England and the Euros.

“I think Mason will have a top and long career,” Solskjaer said (via Manchester Evening News). “Let the boy settle in now first before we talk about England and Euros, his focus has to be on playing more for us, improving and when he plays more for us that’ll happen by itself. He’s just been picked for the U21s so he’s focusing on his football.”

It’s a gamble taking a teenager into a tournament squad, especially when he’s not had a call-up yet, but if he keeps impressing, Southgate will have no other choice.

Raheem Sterling is likely be England’s star going into the tournament.