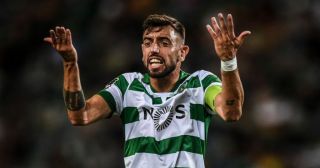 The update you’ve all been waiting for isn’t much of an update to be brutally honest.

The manager is keeping his cards close to his chest, saying (via Manchester Evening News), “I’ve got no transfer updates, so no. If we get something that we can tell you about we will but I’ve got no news now.”

Over the past few days the headlines have gone heavy on Man Utd and Fernandes, and a question on Fernandes was bound to be asked this morning, so Solskjaer would have been expecting one.

James Ducker of The Telegraph claims Fernandes is keen to join United this month, but there is a difference in player valuation between the two clubs.

Sporting apparently want Marcos Rojo in return, though with 18-months left on his contract United may be hesitant to let the Argentine defender leave on the cheap.

The Telegraph report adds that United offered Portuguese goalkeeper Joel Pereira to Sporting and they rejected.

Ed Woodward and Matt Judge held talks over the attacking midfielder with the Sporting president, Frederico Varandas, at the club’s Stratton Street offices in London’s Mayfair on Friday morning.

Now it is reported that Jorge Mendes involved in helping to broker a deal.

Sporting are likely to let things drag so that Fernandes can play in their derby against Benfica this weekend.