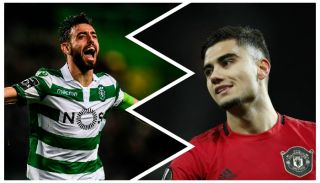 Sporting Lisbon have reportedly requested that they will loan Andreas Pereira if they are to allow Bruno Fernandes to sign for Manchester United.

Since the beginning of the January transfer window, United have again been linked with the Portugal international, who they were reportedly interested in during the summer.

The reports are coming in fast and it looks like a deal could go through in the coming days, unless Sporting drag things on with the view of Fernandes playing in their derby against Benfica this weekend.

READ MORE: What Bruno Fernandes could bring to Manchester United

And a lot depends on the two clubs compromising over the deal.

While Sporting would prefer a straight-cash deal in the region of £64m, Portuguese newspaper A Bola (translated by Sport Witness) claims that they are also interested in signing Andreas Pereira on loan.

The Telegraph claims Sporting rejected a proposal from United including goalkeeper Joel Pereira and they would also link to bring Marcos Rojo back to the club after losing him in 2014 to the Red Devils.

A. Pereira has made 24 appearances for United across all competitions this season, and would probably act as a like-for-like replacement for Fernandes, but Solskjaer can’t afford to lose more midfielders with Paul Pogba and Nemanja Matic out injured.

Nemanja Matic reportedly wants out with The Sun claiming MLS outfit Chicago Fire are interested in signing the Serbia international.