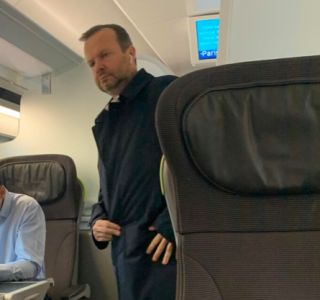 Ed Woodward was spotted travelling to Paris on the Eurostar on Tuesday, unsurprisingly prompting a host of questions from Manchester United fans.

The Vice-Executive chairman is under pressure from United fans to complete transfers in this January transfer window.

And according to BBC Sport, United are in talks with Sporting Lisbon captain Bruno Fernandes, who is keen on a move to Old Trafford.  But, as of yet, no deal has been agreed to sign Fernandes.

Rumours started flying round on social media over what Woodward’s trip to Paris could be about, but the club have clarified why he is visiting the French capital.

According to the Express, United have stated that the trip was ‘related to club matters but not with a view to transfer prospects’.

United fans may be concerned that Woodward is not instead prioritising talks to sign Fernandes, but it is Matt Judge, United’s head of corporate development, who is responsible with negotiating a deal for the midfielder. Woodward then signs off the transfer if negotiations are successful.

Big Ed #Woodward on the Eurostar to Paris at the minute watching the UK Office. Different players for different needs #MUFC pic.twitter.com/TGba2fTWeg