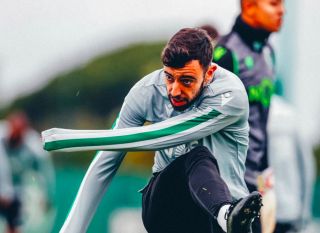 Sporting Lisbon have released a picture of Bruno Fernandes training on Tuesday afternoon as speculation surrounding his proposed move to Manchester United continues to intensify.

Ole Gunnar Solskjaer is keen to bring in creative options this month and it looks as if Fernandes has been identified as the number one target.

According to BBC Sport’s Simon Stone, United are in talks to sign the £60m-rated Portugal international.

It is claimed Fernandes is keen to move to Old Trafford this month, but no deal has yet been agreed between the two clubs.

Fernandes has scored 7 goals and contributed 8 assists as Sporting captain in the Primera Liga this season, and could be exactly what Solskjaer is looking for to fill the attacking midfield role.

The 25-year-old was heavily linked with a move to United in the summer and it seemed obvious the Reds should have signed someone of his calibre with a lack of creative options in the squad glaring.

Solskjaer’s need has been accentuated with United’s midfield injuries and consistent struggles to break teams down this season, and Fernandes could be the man to help solve the problems.

But as seen in these photos ,courtesy of Sporting’s official twitter below, no deal appears imminent with the midfielder still training for his club.