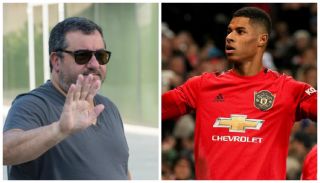 It is claimed that representatives of the Manchester United forward held talks with Italian super agent Mino Raiola.

Despite holding a frosty relationship with the club, it was recently revealed that he had agreed to represent Jesse Lingard, as per the Metro.

However, according to David Ornstein of The Athletic (via Daily Mirror), Raiola has held talks with the brothers of Rashford, who allegedly sought advice from him about growing the forward’s profile.

But does he really need a bigger profile than being United’s biggest star at the moment?

Rashford’s current contract at Old Trafford runs until 2023 and he already has 19 goals to his name this season.

Duncan Castles said on The Transfer Window podcast that Raiola is already in talks with Roma, AC Milan, Inter Milan and Napoli over Lingard’s future.

Lingard has made 27 appearances across all competitions for the Red Devils this season.

But he has only scored once and assisted once since the 2019/20 season began.

Ole Gunnar Solskjaer has omitted that he has a strong relationship with Lingard, despite his new partnership with Raiola.

“Jesse is working for Man United,” the boss said (quoted by the Manchester Evening News).

“Whoever he speaks to and gets his advice from is none of my business and Jesse knows what we expect from him.

“I have a great open relationship with Jesse — we talk freely so I don’t speak to the agents of many players.”