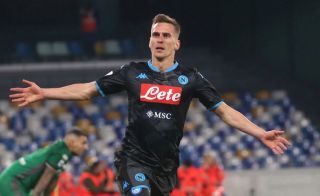 Manchester United need to sign a striker this month or in the summer.

It can be difficult to conduct business in January because football clubs don’t like losing their best players midway through the season. In the summer they’ve more time to plan for life without these stars and replace them with new signings.

According to The Sun, Ole Gunnar Solskjaer has made prolific Polish forward Arkadiusz Milik, 25, his No1 target this month.

And it sounds like this will be music to Milik’s ears.

The Poland international, who has ten goals in 12 games for Napoli this season, once revealed he wants to play for Man Utd in an interview with Polish media outlet Pitka Nozna after he signed for Bundesliga club Bayer Leverkusen in 2012.

A previous report from The Sun claims Milik is valued at £60m and he could be worth pursuing after missing out on Erling Haaland.

Milik joked he would love to play alongside Robert Lewandowksi at Old Trafford.

“My dream is to play for this club,” he told Pitka Nozna, as cited by The Sun.

“I am a Red Devil supporter, so I would love to play at Old Trafford one day.

“For now, however, I am a Bayer Leverkusen footballer, and I am very far from Manchester.”

Bayern Munich striker Lewandowski is a role model for all young Polish footballers, but we doubt he’ll ever make the switch to United.

“It would be fun to play on Robert’s side, especially in Manchester United,” Milik added.

We haven’t seen many reports on Milk this month, so The Sun are being bold saying he is our No1 target in January, especially when it sounds like United are working hard to complete a deal for Sporting playmaker Bruno Fernandes.