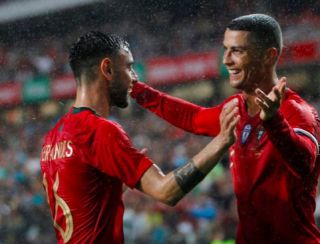 According to BBC Sport, the Sporting Lisbon midfielder has expressed his desire to move to Old Trafford, but no deal has yet been agreed between the two clubs over his proposed transfer.

Ole Gunnar Solskjaer needs a playmaker to bolster his creative options in this window, and in Fernandes, whom they were heavily linked with in the summer, the United boss would have a quality attacking midfielder among his ranks.

The 25-year-old has made 19 appearance for national side Portugal, scoring two goals.

Playing for Portugal, he has featured alongside former United stars Cristiano Ronaldo and Luis Nani, who have both previously commented on how he is due a big move.

Nani also suggested the Premier League could be the perfection destination for Fernandes to show off his talents.

“I often said to him, ‘you with the strength you have, if you train a little more you will explode and drive the English crazy’. England is where he will shine,” he told Portuguese outlet A Bola.

Fernandes is clearly thought of highly amongst his Portuguese teammates and is exactly the type of player United should be looking to sign this month.

He has scored seven goals and registered 8 assists in just 15 Primera Liga appearances this season and could provide the missing link between midfield and attack in Solskjaer’s side.