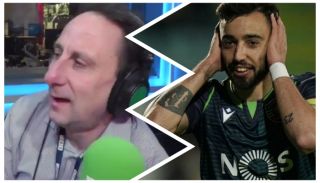 Bruno Fernandes’ transfer to Manchester United seems to be edging closer and more journalists appear to be throwing their hat into the ring with valuable information.

James Ducker of the Telegraph claims Fernandes has informed Sporting Lisbon he wants to leave if the Portuguese club can agree on a deal with United.

He adds that Sporting appear to be pushing a deal forward as the transfer fee will help with their financial difficulties.

BBC Sport journalist Simon Stone is reliable when it comes to Man Utd transfer news. Speaking to BBC 5 Live Sport, he claims there has been meetings between the clubs and backs up claims that the player wants the move.

“There has been meetings… Fernandes would like to go”

🗣️ @sistoney67 thinks a deal between #MUFC and Sporting Lisbon for the Portuguese midfielder, Bruno Fernandes, is close.

This appear to be heating up and we wouldn’t be surprised if Fernandes was announced before the end of the week.

Who knows; Fernandes could even make his debut against Liverpool on Sunday?

What a way that would be to make your entrance.

Ole Gunnar Solskjaer could definitely do with an addition like Fernandes this month.

United have lacked a creative spark in the centre of the park.

Fernandes would be an upgrade on Jesse Lingard and Juan Mata.

And, remember, there’s no smoke without fire. It may be time to start getting excited about a new signing.