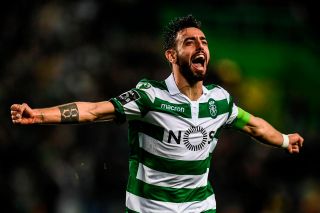 A return to the José Alvalade Stadium would see Rojo get regular football again, something that is unlikely to ever happen again at United under Ole Gunnar Solskjaer.

READ MORE: Incredible Greenwood stat shows Man Utd teenager as one of the most lethal Premier League finishers from outside the box

Too rash and injury prone, Rojo was never highly thought of at United. He has a nasty streak which we enjoy, but that’s about it…

Editor-in-chief at O Jogo adds that Sporting’s president Frederico Varandas and the Liga NOS club’s director Hugo Viana were in the UK last week working on the transfer.

Sky Sports backs up the claim about Rojo and state that United are prepared to let the Argentina international leave Old Trafford.

Fernandes would bring some much-needed creativity to United’s midfield. Something Jesse Lingard and Juan Mata have been unable to do for the most part of this season. The latter performed superbly against Norwich on Saturday, providing an assist for Marcus Rashford, but his best days are behind him and Solskjaer needs to look for someone better in that role.

The Portugal international scored twice in Sporting’s 3-1 win at Setubal on Friday.

After the match, Sporting boss Silas was asked if he would be available to play against rivals Benfica on January 17.

He said (via Sky Sports Transfer Centre): “I can’t guarantee any of these things because I don’t know. Bruno is a huge player and all players like him have a lot of market. I don’t like to think about it, but I’ll be thinking of alternatives in case Bruno leaves.

“I hope it doesn’t happen, but we have to start thinking that.”