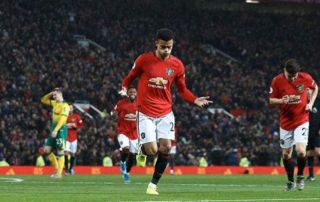 The sky is the limit for Mason Greenwood. The Manchester United youngster has performed exceptionally in the first team this season and it looks like we have a future Old Trafford star on our hands.

The 18-year-old has been hyped up for many months now, with the academy graduate racking up an impressive goal tally in the Premier League.

Greenwood has lapped up all the chances that he can get and is now a regular for a cameo or sometimes a start in the majority of United’s games.

The main reason for that is his clinical finishing. Greenwood has already become a reliable source of goals for Ole Gunnar Solskjaer’s side.

His winner during the 4-0 win over Norwich City on Saturday was his fourth Premier League goal of the season, taking his tally total to 9 for 2019/20.

Man Utd’s Mason Greenwood has scored four #PL goals this season, the most by any teenager in the competition this term pic.twitter.com/z4rHFvU51M

Borussia Dortmund sensation Jadon Sancho is the only teenager in the top European leagues who has managed more goals.

It would be great to see both become teammates at Old Trafford.

Solskjaer decided to sell Romelu Lukaku and loan out Alexis Sanchez in the summer. That was heavily criticised by fans because it left us short in the goalscoring department, but if United did sign someone last summer would we have seen as much of Greenwood?

If Greenwood can maintain consistency, which is rare in youngsters, United may hold back on acquiring a striker this month and maybe again in the summer.

Today we stumbled across a very impressive Greenwood stat shared by Statman Dave, claiming the United striker has the third most goals scored outside the box (3) in the Premier League this season — behind only James Maddison and Riyad Mahrez (4).

Mason Greenwood has scored 3 Premier League goals from outside the box this season, only James Maddison & Riyad Mahrez (4) have scored more.

One of many finishes in his locker. 🔥 pic.twitter.com/UkIAfZxCQt

It seems every time Greenwood plays he breaks a record or an impressive stat emerges.

The boy is an absolute gem!