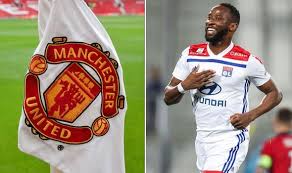 Manchester United scouts have watched Moussa Dembele score twice in four days as they reportedly ponder making a move for the Lyon striker after missing out on Erling Haaland, who joined Borussia Dortmund earlier this month.

Ole Gunnar Solskjaer is also said to be looking to sign an attacking midfielder with Bruno Fernandes understood to be one target, as per the Guardian, but it sounds like United are in the market for a striker too.

Sky Sports claim the Red Devils are in the race for Dembele, but Chelsea and Tottenham are among the clubs sniffing around the 23-year-old forward.

Last week journalist Ian McGarry said Chelsea had verbally agreed a deal with the player (via The Transfer Window podcast), although manager Frank Lampard played down the club’s interest on Friday.

“He’s a player I know and a player the club know, but I’m surprised to see his name crop up so frequently in relation to us to be brutally honest,” said Lampard, as quoted by RTÉ, clearly stating that the media are getting overly excited about Chelsea’s apparent interest in Dembele.

It will be interesting to see if Chelsea sign a goalscorer in the summer, with Tammy Abraham having a brilliant season to date. Though after losing Eden Hazard last year they could definitely do with more firepower up front.

Goal have since reported that Spurs are “looking into the possibility of signing” the Lyon goalscorer with Harry Kane sidelined until April at the earliest.

Both United and Chelsea sent scouts to watch Dembele score in the Coupe De La Ligue against Brest on Wednesday night. And, according to journalist Ignazio Genuardi (via Get French Football News), scouts from MUFC were in attendance at the Matmut Atlantique to watch him play against Bordeaux on Saturday — also reported by The Sun.

Dembele scored the winning goal and registered an assist against Bordeaux, so the scouts will return from their trip with plenty to think about.

Should United make a move for Dembele this month or wait to sign a striker in the summer?