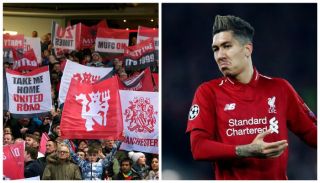 A new chant was sung by Manchester United fans over the weekend which is bound to some controversy.

It relates to a Liverpool player so you can be sure they’ll be out in numbers displaying outrage at Reds for making fun of Roberto Firmino’s appearance.

It may not be acceptable as it’s not something you would normally shout at a stranger walking down the street, but this is football and football chants tend to push several boundaries.

As seen below in the tweet, United fans were filmed inside a pub mocking Firmino and calling the Liverpool forward a lesbian.

Manchester United fans in the pub chanting: “There’s something that the Stretford End wants you to know, Bobby Firmino is a lesbo [lesbian]”

While we don’t condone such chants, taking the p*ss out of your rivals is part and parcel in football.

Sometimes it crosses a line and sometimes it’s just stupid!

If we can’t make fun of Liverpool on the pitch, we’ll find another way to do it for now…