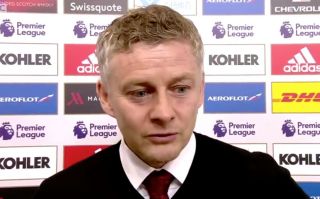 Loads of Manchester United fans are questioning comments made by Ole Gunnar Solskjaer.

The manager is not having the best of times at Old Trafford at the moment, although we did enjoy the 4-0 win over Norwich on Saturday, which saw the team showcase great attacking football and dominance throughout the game.

But before the win over Norwich we endured a 3-1 home defeat against City in the Carabao Cup semi-final first leg. It puts us in an unwanted position for the second leg — going into the match with a two-goal deficit.

Solskjaer managed to find what he felt was one positive, as he said City playing such a strong team for the game shows how much they respect United.

He is now being accused of having a small-time mentality which is something David Moyes was criticised over during his time in charge at Old Trafford.

Back in 2014, Moyes said United must aspire to City’s standard, as per Sky Sports, and you could argue we’ve gone further backwards since then.

Ole Gunnar Solskjaer on MOTD: ‘When you play Man City in the Carabao Cup and they put their strongest team out, you know you’ve gone places because that means they respect us.’

A) not even true, no Aguero, Bravo in goal etc

B) uproar if David Moyes had said this as MUFC manager

Here are just some of the responses to Solskjaer’s bizarre take on City’s team, ultimately forgetting that Pep Guardiola left out a lot of his key players such as Sergio Aguero for the comfortable victory.

The first tweet includes a snippet of Solskjaer’s post-match interview after Norwich when he makes the comment about City fielding their strongest team against United in the League Cup.

Ole Gunnar Solskjaer: “When you play against Man City in the Carabao Cup, and they put out their strongest team, you know you’re going places…”

This is one of the worst things I’ve ever seen. They didn’t even have Aguero, Ederson, Jesus, Silva. 🤦‍♂️ pic.twitter.com/kKme51ZnnF

Solskjaer: “When you play Man City in the Carabao Cup and they put their strongest team out, you know you’ve gone places because that means they respect us.”

Someone should tell Solskjaer that it is Man Utd we’re talking about. City didn’t even play with a striker in that game.

He genuinely stood up there and gassed himself somehow after getting piped by City at home. He belongs in footballing hell.

This is the worst thing he’s said and there’s a lot to choose from.

Hes got a point? That strongest Man City team is used for top opponents, he saw you beat him last time so he doesnt want it to happen again, pep respects the fact you broke down his man city team? You man united fans are too needy, ole is the best you will get and deserve🤷🏻‍♂️🤦🏻‍♂️

@SwitchesthePlay @JamesLaws92 he should be sacked on the spot for this

He is literally a Virus to the club, split’s the fan base, defends the glazers and now this ?