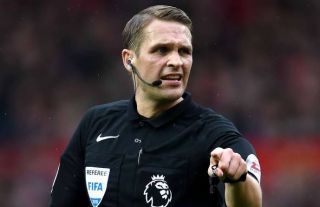 The Premier League have announced that referee Craig Pawson will take charge of Manchester United’s trip to Liverpool on Sunday.

Man Utd are the only team to have taken any points from Liverpool this season when Adam Lallana’s goal robbed Jurgen Klopp’s side a point after Marcus Rashford had put the Red Devils 1-0 up in the first half. It was a game we should have won.

News did the rounds today that Pawson would referee this weekend’s encounter and there were plenty of United fans who had their say on Twitter.

Here is what a few of them had to say:

VAR will play a part most likely in Liverpool advantage 🤨

I think is Craig VARson!!!

As you can see above, the news that Pawson will referee the game has been met with negative reactions.

But if United play with an effective plan, and do so to their best ability, we won’t need to depend on referee decisions to win the game.

The pre-announced officials shouldn’t shape the outcome of the game. It’s about time someone beat the Scousers this season.