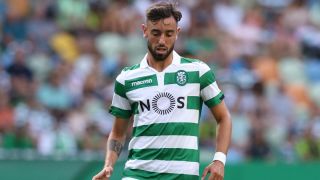 Bruno Fernandes is said to have informed Sporting Lisbon he would like to join Manchester United this month if a deal can be agreed on between the clubs.

Ed Woodward and Matt Judge, the club’s head of corporate development, held talks over the Portugal international with the Sporting president, Frederico Varandas, in London on Friday, according to the Telegraph.

The report goes on to claim that negotiations are continuing with Jorge Mendes understood to be involved in helping to broker a deal.

If a deal goes through Ole Gunnar Solskjaer will be given the opportunity to bolster his midfield options. And it’s definitely needed as the team suffers a midfield injury crisis following blows suffered by Scott McTominay and Paul Pogba.

It remains unknown if Nemanja Matic will be allowed to leave United this month, but an earlier report from The Sun suggested that Solskjaer would need to add to his squad before letting the Serb go for another club.

There seems to be a slight difference in valuation of the player. Sporting initially wanted €80m for the playmaker, who United are believed to value at closer to £50m.

It’s noted in the report that United have kept their cards close to their chest but Sporting are pushing for a deal to then use the funding in aid of their financial difficulties.

Marcos Rojo could return to Sporting as part of the deal but he has 18-months left on his contract, and he is supposedly not available on the cheap.

United offered Portuguese goalkeeper Joel Pereira but that was reportedly rejected by Sporting, who appear to be holding out for Rojo.