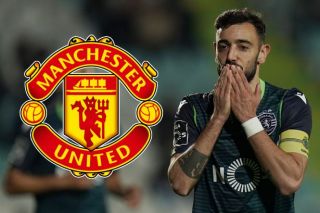 Manchester United have apparently dropped a hint over a transfer deal for Sporting Lisbon star Bruno Fernandes — causing a great deal of excitement amongst supporters on Twitter.

The Red Devils have been strongly linked with the Portugal international in the last few days, with A Bola, as translated by Sport Witness, suggesting a deal could be imminent.

It wouldn’t surprise us if the Portuguese press were getting overly excited and adding unnecessary legs to a story. Fernandes joining Man Utd would be big news.

United fans will be keeping a close eye on the news for transfer updates, and this tweet from the club suggests they may have some exciting news for them soon…

While it’s an innocent tweet from @ManUtd, the phrase ‘here we go’ and the emoji used has caused a bit of a stir.

Fabrizio Romero is a reliable football journalist who fans eagerly wait on for breaking transfer news. He’s built quite a reputation for delivering accurate information on deals involving United.

The Italian journo responded to the club’s tweet and it could be considered as another transfer hint.

It only further excited United fans on social media.

OH MY GOD FABRIZIO PLEASE GIVE US UPDATES ON FERNANDES