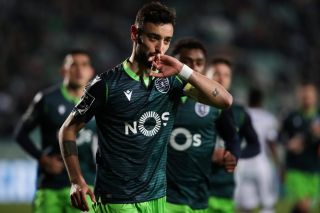 The Portugal international showed exactly why United should sign him, scoring two goals in a 3-1 away win over Vitoria Setubal.

You could say Fernandes performed like he was trying to get noticed, but this is Sporting’s star player we are talking about, and he plays well whenever they tend to dominate.

Man Utd need to add goals to their midfield and it sounds like Fernandes may be about to earn himself a big move away from Liga NOS.

Sporting manager Jorge Silas admitted after the game he was uncertain if Fernandes will stay.

His attention was on the next game against rivals Benfica.

Silva was quoted by Mais Futebol when asked about Fernandes’ possible departure and presence in the derby, saying, “I cannot assure you of both. I do not know. I’m already thinking about the game with Benfica and I’m thinking about taking Bruno.”

Until Fernandes is no longer a Sporting player, Silva has every right to play his star man.

But his comments signal a degree of uncertainty.

According to Sky Sports, United are ‘closing in’ on a deal for Fernandes with Sporting keen to sell to raise funds.