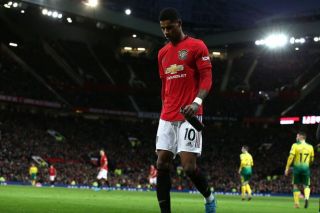 Ole Gunnar Solskjaer has admitted there may be fitness concerns over three of his players ahead of Wednesday’s FA Cup replay with Wolves.

The Manchester United manager is now planning to face Wolves with a fourth-round tie at Tranmere Rovers or Watford at stake.

They go into the game on the back of a 4-0 victory over Norwich City in the Premier League on Saturday, thanks to two goals from Marcus Rashford and one each for Anthony Martial and Mason Greenwood, but there are more fitness concerns for the boss.

Marcus Rashford, Luke Shaw and Ashley Young are all doubts for the Wolves match.

Rashford was substituted in the second half, despite being on a hat-trick, and Solskjaer had this to say (via ManUtd.com): “I don’t know. If he’s ready, and if I decide to play him, you’ll see. He’s played many games and I might have to look at it and see how we can manage him. But, we’ve got a week off very soon – in February.”

Shaw was named on the bench against Norwich but he felt his hamstring in the warm-up and was replaced as a substitute by Tahith Chong.

“He didn’t feel right,” Solskjaer told MUTV. “He’s been ill. So, for me, fine; go home. Hopefully, he’ll be ready for Wednesday.”

Then to tie in with the transfer speculation surrounding Young, the Man Utd manager was quizzed on the reason for his absence. Solskjaer kept his response short, saying, “He wasn’t fit to play.”

There was some good news over the weekend, though.

Harry Maguire returned after missing the Carabao Cup semi-final first leg defeat against Man City, while Timothy Fosu-Mensah and Eric Bailly both featured for the U23s against Newcastle United.