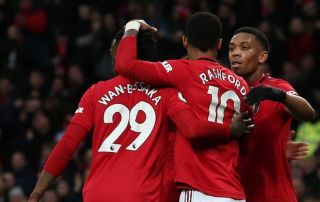 Marcus Rashford marked his 200th appearance for Manchester United with a brace against Norwich City.

The first goal came as Man Utd’s opener in a 4-0 win over the Canaries, with Rashford picked out at the back post by a terrific Juan Mata cross.

United dominated the game from start to finish. Anthony Martial and Mason Greenwood also got their names on the scoresheet.

As United went on to destroy Norwich, Brandon Williams was fouled inside the box before Rashford stood up to successfully convert his penalty.

However, there was some bad news for Rashford during yesterday’s game.

The United forward had to be replaced by Daniel James in the second half and could miss Wednesday’s FA Cup replay against Wolves after sustaining some sort of knock, as revealed by Ole Gunnar Solskjaer via ManUtd.com.

Rashford took to Twitter after the match to try describe what it feels like to be following in the footsteps of club legends like Ryan Giggs and George Best by becoming the third youngest player to play 200 games for the Red Devils.

Can’t put into words what it means to follow Giggsy and George Best. Two goals and three points completes a perfect day 👊🏿 pic.twitter.com/X4g72EMH0S