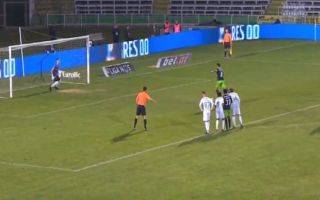 The Bruno Fernandes links are not going anywhere.

Last night he played for Sporting Lisbon and made another goal contribution from the penalty spot.

A report from Sky Sports has indicated that a move to Manchester United was close, so it’s possible that Fernandes has played his final game for the Portuguese outfit.

He put Sporting 2-0 up last night after he won a spot-kick and converted it in a classy manner, as seen below via SPORT TV:

The small jump before striking the ball seems to be an inconvenience but it doesn’t stop Fernandes from hitting the back of the net.

We could be watching him take penalties at Old Trafford before the end of the month.