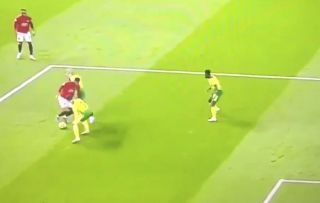 The Manchester United forward cuts in with a flip-flap to beat his man, leaving him for dead, but was unable to get a strong enough shot on goal to beat the Norwich goalkeeper.

Rashford is in flying form at the moment and recent claimed the PFA player of the month for December.

Today will be hoping to add to his tally for the season and he came close as you will see below (footage courtesy of Premier Sports):

United need to keep building on the pressure they’re currently inflicting on Norwich.

The Norwich right-back is in for a long afternoon with Rashy!