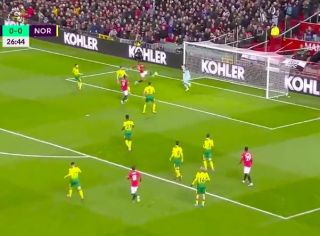 Marcus Rashford has given Manchester United the lead against Norwich City midway through the first-half.

United have deserved their lead after sustained pressure on the Norwich goal, and Rashford marked his 200th appearance for the club with the opener.

It took a piece of brilliance from Juan Mata to break down Daniel Farke’s side. The Spaniard cut in from the right and whipped in a sumptuous cross for Rashford at the back post.

The 22-year-old made no mistake to score his 13th league goal in 21 games this season.

Mata has been showing Ole Gunnar Solskjaer some of the creativity he has been missing with his persistence to start Jesse Lingard this season.