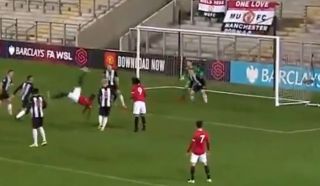 Eric Bailly may have only returned from a serious knee injury, but he didn’t hold back last night when taking to the field for Manchester United’s U23s versus Newcastle.

The Ivorian centre-back has been out of action since the summer after he required surgery on his knee.

But last night he came close to scoring with an ambitious bicycle kick but the ball was pushed over the bar by the Newcastle goalkeeper.

He decided to go airborne to try and extend United’s lead, as seen in the video below (via MUTV):

The game ended in a 2-1 win for the young Red Devils.

Bailly, who has went downhill since his impressive debut season, is hopeful he will be back in the first-team picture in the coming weeks.

That will come as good news to Ole Gunnar Solskjaer who is struggling to keep his squad injury free.