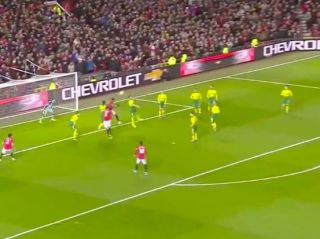 Anthony Martial has scored his fourth goal in as many Premier League appearances against Norwich at Old Trafford.

The Frenchman netted United’s third against Daniel Farke’s side, who have succumbed to an attacking blitz from Ole Gunnar Solskjaer’s side early in the second-half.

Following more sustained pressure, the Reds caught their opposition off guard with a quick corner.

Juan Mata received the ball and whipped in another delightful cross, Anthony Martial powerfully nodded in past Tim Krul.

Marcus Rashford had given United a comfortable two goal lead on his 200th appearance, converting Mata’s brilliant first-half cross and scoring a penalty.