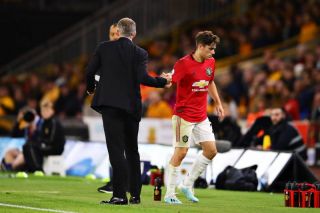 There is no doubt that the hectic festive period will catch up with our players, even if some fans complain about how much the Manchester United stars earn on a weekly basis.

Playing game after game is bound to take its toll with players eventually.

And it’s easy to forget how far Daniel James has come this past year. He didn’t make his debut for Swansea City until 2018 and this season he made the jump to top-flight football, so it’s understandable that playing every week at the highest level can be exhausting both mentally and physically.

When he signed for the Red Devils it was thought that the 22-year-old would be an impact sub, but he’s played in 26 games and is already a vital part of the team, using his pace down either flank to unnerve defenders.

It’s a great story and we all want a happy ending which means success (take your dirty mind out of the gutter).

A recent report from the Manchester Evening News has indicated that Ole Gunnar Solskjaer has promised to give the Wales international a much-needed rest. He admits that James has much more than initially planned and has noted the importance to protect the young forward.

Solskjaer gave James a breather by leaving him on the bench for the Boxing Day win over Newcastle United but he played 90 minutes two days later at Burnley.

James also gets kicked a lot by opposition players looking to take advantage of his small build.

“Dan’s been fantastic,” Solskjaer is quoted by the MEN. “A revelation with his work-rate and his attitude. And he is learning all the time.

“But now there are fewer goals but I am very happy with him and we will try to protect him and rest him when we can as well.”

This will go down as good management as long as United win games — and don’t have to call upon James during the period Solskjaer wishes to rest him.

It could be argued that James’ predicted has tailed off after a fast start, so we think a rest will do him good with United needing to push for a top-four spot.

This season he has scored three goals and registered six assists for United.