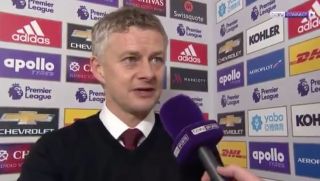 Of course, the manager was always going to be happy with the result but Man Utd did well to dominate the game. They played with swagger as Juan Mata operated like a wizard in the no.10 role, backing up what Gary Neville previously said about the playmaker in December.

The Canaries stood no chance as United scored four goals and kept a clean sheet. It was a convincing display and we’ve not had many of those this season.

Solskjaer was asked about Bruno Fernandes after the match.

The Sporting Lisbon playmaker has been strongly linked with a move to Old Trafford, as per Sky Sports, and Solskjaer opted not to dismiss the reports.

Instead he insisted that he would not talk about players that belong to other clubs.

The United boss followed that up with claiming he has the backing of the board.

“Everyone raves about the #FACup team that Liverpool beat Everton with. Our league team is a year younger on average.”#beINPL #MUNNOR pic.twitter.com/ghJpAMepNy