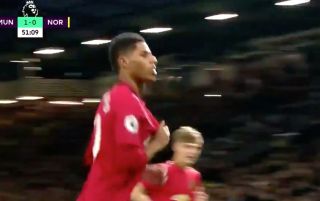 Marcus Rashford has scored from the penalty spot to make it 2-0 against Norwich City at Old Trafford.

The Manchester United forward stuck the ball into the bottom corner, despite Tim Krul getting a touch on it beforehand.

Rashford drove the ball hard and low to complete his brace against the Canaries.

Watch the goal below, footage courtesy of beIN SPORTS:

Rashford played Brandon Williams in to win the penalty. The young left-back did brilliantly to bomb forward before forcing Krul to take him down inside the box.

There can be no arguments over the penalty!

Man Utd dominated the first-half and look set to do the same again after the break.

It’s been a convincing display thus far and we hope that continues.