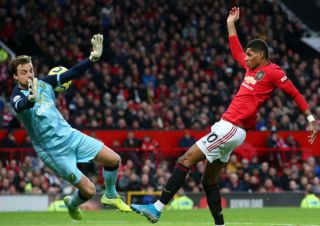 Marcus Rashford’s opening goal against Norwich City was his 40th for Manchester United.

The England international is in flying form at the moment and he finished brilliantly at the back post following a smooth cross from Juan Mata.

Man Utd have dominated the game thus far and Rashford has been the best player on the pitch.

He’s even making a laughing-stock of Norwich’s defenders — pulling off a terrific flip-flap trick  before entering the box and coming close with a shot on target.

According to Sky Sports Statto, Rashford is the second youngest player in United’s history to score 40 goals, as noted in the tweet below:

Wayne Rooney — the club’s all-time record goalscorer — is the youngest.

It’s great to see Rashford take such responsibility on the pitch. At the moment there can be no debate over who deserves to be crowned United’s player of the season.

Especially if he keeps scoring goals at this rate!