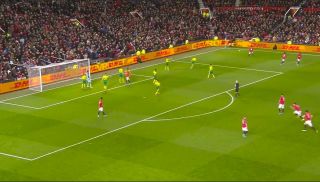 Albeit against a poor Norwich side sat bottom of the league table, the Reds were dominant throughout and were deserving of their four goals this afternoon.

With United already two goals up, a quick corner was taken that completely took centre-halves Victor Lindelof and Harry Maguire off guard.

The pair sprinted into the box to make the corner, prompting some brilliant reaction on social media.

The quickly taken corner did in fact lead to a goal, with Anthony Martial powerfully heading home Juan Mata’s cross past Tim Krul.

See the goal courtesy of DAZN, plus the tweet below:

Lindelof and Maguire look like they are about to miss a bus. pic.twitter.com/dfYznaZA3T