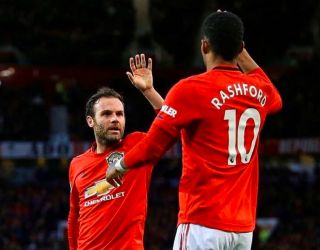 Ole Gunnar Solskjaer’s persistence in starting Jesse Lingard has been baffling at times this season.

Particularly against a low block, Lingard does not offer the creativity or the cutting edge needed in the middle. He was out with illness today meaning the United boss had to consider other options.

Juan Mata started from the right with Andreas Pereira preferred through the middle in this afternoon’s system.

But the Spaniard almost played as if he had a free role, drifting in and causing problems in between the opposition defence and midfield.

He may not be as sharp as he once was, but Mata has quality on the ball very few United players can offer.

The 31-year-old produced two brilliant assists today, setting up Marcus Rashford for the opener with a sumptuous curled cross, before setting up Anthony Martial from a corner to give United a three goal lead.

Mata was arguably United’s best player on the pitch today and deserves to retain his place in the FA Cup replay against Wolves on Wednesday.

See his stats from today’s victory below, courtesy of Statman Dave:

Rolling back the years. 🎩🎩🎩 pic.twitter.com/loNKPG4N0i