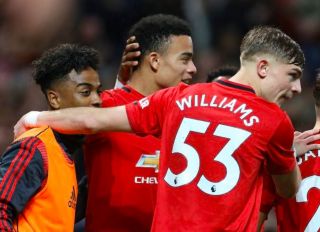 The youngster retained his place in the team ahead of Luke Shaw at left-back, who eventually had to pull out from his place on the bench with an injury in the warm-up.

The Reds asserted their dominance early on and were comfortable throughout. The game became a procession when United were just 1-0 up through Marcus Rashford.

His penalty doubled United’s advantage before Anthony Martial and Mason Greenwood got in on the act.

Williams was responsible for winning United’s penalty with an ambitious run down the left-flank, which summed up his overall performance.

The 19-year-old was a constant menace down the left-flank for the Reds, as he provided constant overlapping support for Rashford.

Alongside Rashford and Juan Mata, he was yet again contender for man of the match this afternoon.

Although this was a relatively routine victory against a side bottom in the league, Williams has shown consistently that he has maturity beyond his years in his play.

His controlled aggression in defence combined with his willingness to attack make him a real prospect for Ole Gunnar Solskjaer, and surely for the time being he should be first-choice left back at the club.

See his stats below, courtesy of Statman Dave: