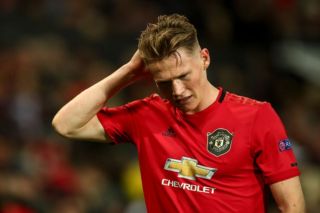 The Scotland international sustained a knee injury during Man Utd’s 4-1 Boxing Day win over Newcastle United and seen on crutches at Old Trafford on Tuesday as the Red Devils lost the first leg of their Carabao Cup semi-final against rivals Man City.

It’s a huge loss to the side, along with the ongoing absence of Paul Pogba, with pressure building on Solskjaer to get better results. With McTominay out he has lost one of his greater influencers on the pitch.

Solskjaer ruled out the chance of McTominay featuring before the Wolves game in the Premier League on Saturday 1 February, but suggested that he may recover in time to face Chelsea at Stamford Bridge.

“Scott’s going to be out for a while, for sure,” Solskjaer said (via ManUtd.com) on Friday morning in his press conference ahead of Saturday’s visit of Norwich City.

“Well, we won’t see him before the winter break anyway, so we’ll see him hopefully in February.”

Solskjaer’s statement rules McTominay out of our next six matches at a minimum, with a potential FA Cup fourth-round tie against Tranmere Rovers on Saturday 26 January also looking unlikely for the midfielder.

The sooner Scott’s back the better!