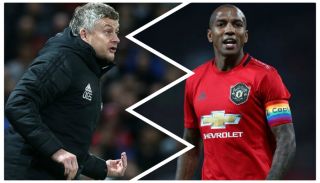 There has been a lot of transfer speculation about Ashley Young this week.

Sky in Italy claim Young has turned down an offer of a one-year contract extension from Manchester United and that the winger turned full-back looks increasingly likely to leave Old Trafford this month.

The 34-year-old’s current deal expires in the summer meaning interested clubs, such as Inter Milan, could wait until then to sign him on a Bosman.

Ole Gunnar Solskjaer is keen to keep Young, who is one of a few leaders in the Man Utd dressing room and is versatile enough to play a number of different roles.

“He’s one of our players, our captain, there’s loads of speculation, we’ve just got to handle it,” Solskjaer said (via Manchester Evening News). “Ashley’s been very professional and focused so I don’t think that’s going to change.”

When asked specifically about Inter’s reported interest, Solskjaer responded: “Well, that’s a discussion me and Ash will have if it comes up, we haven’t got too many players fit and ready so we need the ones we have.

“Ashley’s been very, very good for this club, been a very good captain this season, so let’s see where we are in June and Feb as well.”

The reasons for Solskjaer wanting Young to stay are probably the same reasons Antonio Conte has for wanting to take Young to Inter midway through the season, as they attempt to topple Juventus and reclaim the Serie A title.

The Sky Sports report suggests Young’s decision to leave United is based on playing time.

Brandon Williams is currently the best left-back at the club and even Luke Shaw probably sits ahead of Young in the pecking order.