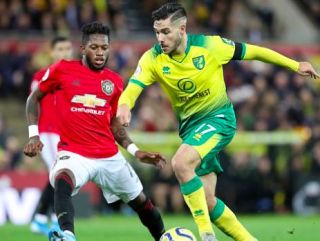 Remarkably, Ole Gunnar Solskjaer’s side still sit fifth in league table and could close the gap on Chelsea in the Champions League places with victory against a team sat rock bottom.

Daniel Farke’s men pulled off the unforgettable victory over Manchester City at Carrow Road earlier this season, but since then it has been a struggle and they now face a huge uphill battle for survival.

We spoke to the Athletic’s Michael Bailey, who was kind enough to give us his thoughts on the opposition ahead of the game.

As an outsider, what do you make of Manchester United’s current plight? We fear for Solskjaer if United lose on Saturday.

1, From the outside looking in – it feels like United want to be in the midst of a clear rebuild and transition, yet what they’re doing isn’t helping them make a success of it. At that point, it almost looks like creating time but delaying the inevitable. The recruitment won’t be enough to sustain the changes they need and the expectations a club of that size has. It feels like it is in a difficult spot, despite some encouraging moments here and there.

What have you made of Norwich’s efforts to stay in the Premier League so far and do you think they can still make a great escape?

2, I feel Norwich are not as bad as the table suggests and it’s been a frustrating campaign in a lot of ways. They have some supremely talented players and if they do go down, they will struggle to keep them. It’s been a hard slog and without owner investment, they’ve found a huge gap in competing with other Premier League sides. They have also missed some opportunities in the summer with recruitment and it’s been hard to counter the expectation of how hard this season would be. I’m still hoping they push their survival fight to the very end – but it’s going to be difficult.

The game at Carrow Road was all too easy for Solskjaer’s men even though United were going through a poor run of form. Do you think Daniel Farke will be able to make changes that can affect the result on Saturday?

Norwich are playing better at the moment, so that’s a benefit. They are missing some players – but others are in good form and even with just a few weeks between the games, Norwich seem to have made an improvement on where they were. Saturday will be a really interesting test for that improvement in collective and individual form.

Todd Cantwell has been linked with a move to United in the summer. Just how good is the midfielder and do you think he could cut it at Old Trafford?

4, Todd has surprised plenty of people at Norwich this season – but he thoroughly deserves the plaudits. He’s been excellent on the ball and made a telling contribution with goals and assists. It’s a joy to watch him when it’s going well. He still has a lot of experience to gain, which makes me think there’s plenty of development to do. Whether a move to a big club in the summer would impact some of that negatively? Maybe. But Todd has made a point of proving people wrong a lot already – so who knows.

5, United have fitness issues. Norwich need something positive. Let’s say 1-1 and all move on.