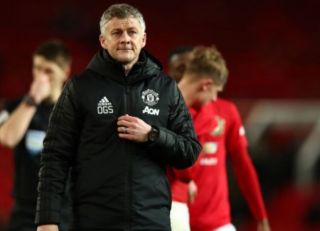 Take a look at the Premier League table. Take a look at the fact we are now forced to a replay in the FA Cup third round. Take a look at how unlikely a Carabao Cup final is for Manchester United after losing the first leg of the semi-final 3-1. Then there’s the Europa League which will resume in February as the knockout phase begins.

This season is shaping up horribly for Man Utd. It’s likely to be another campaign without a trophy and Champions League qualification requires a lot of improvements.

If United were a club with ambition, looking to make amends to the mistakes that have left us so far behind, they would be taking this transfer window seriously.

READ MORE: Liverpool truly believe they got one over Man Utd with Minamino signing

We hear about wanting players who will improve the current team as if the group of players we watch every week are something special. And they’re not.

Solskjaer spoke to the media this morning and gave an unconvincing update on United’s stance in the January transfer window. He said (via Manchester Evening News): “We’ve still got the same thoughts we had a month ago, got the players we have, working with the ones we have and if something happens we’ll tell you.”

I don’t believe for one minute that Solskjaer is happy with the current crop of players. He can’t be happy when his best player has been out injured all season and looks set to be absent for another while.

Now is the time for Solskjaer to demands to executive vice-chairman Ed Woodward. You will see more anger aimed towards the manager from the fans if he doesn’t and results stay the same or get worse.

United need to be looking at two midfielders at the very least. A goalscorer and a right winger, as well as a new centre-back and left-back.

There’s so much work to do but the club is being run by greedy idiots.