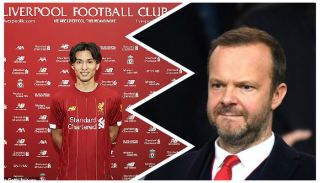 Takumi Minamino joined Liverpool at the beginning of the month — amid some speculation that he was also being considered by Manchester United.

Liverpool decided to pay the midfielder’s release-clause which came to £7.25m for the 24-year-old from RB Salzburg.

Minamino has already made his Liverpool debut as it remains to be seen whether he will be a success at Anfield.

According to James Pearce, who writes about Liverpool for The Athletic, United were watching Minamino closely and the manner in which they claimed his signature delighted LFC’s hierarchy.

“And certainly with Minamino they were absolutely delighted to outflank a number of other European clubs to secure his signature,” Pearce says via The Athletic.

“I know they’ve distanced themselves from it subsequently but Liverpool were adamant that Manchester United had a long-standing interest in Minamino as well.

“Speaking to people behind the scenes at Liverpool they view this season as an absolute no brainer for them.”

Prior to his switch to Liverpool we had heard nothing about Minamino. For a player United were said to be watching closely, he didn’t pop up as a United target in the gossip columns until they had a deal done, so we’re not really buying into the view that the Red Devils were beaten to his signature by their rivals.

There’s no doubting, however, that Minamino is the type of player United need to add some creativity in the middle. That’s why the club has been linked with players such as James Maddison and Jack Grealish, both of whom know the Premier League better than Liverpool’s latest addition.

Liverpool take on Tottenham this weekend and Minamino is unlikely to start that one.