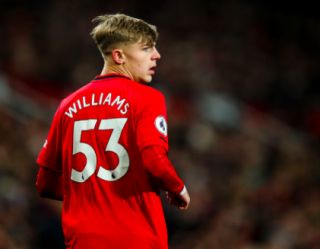 Williams has made 14 appearances for United this season, after surprisingly making his way into the first-team in the absence of Luke Shaw.

The 19-year-old was not even including in United’s touring party for the pre-season tour of Australia and Asia this summer, but has been a revelation since coming into the fold.

Williams has consistently outperformed Solskjaer’s first-choice left-back Luke Shaw when called upon. The youngster has delivered performances beyond his years, showing a controlled aggression in defence whilst having the ability to get forward and cause problems on the overlap.

“You can look at the derby and say there’s maybe two players in there that came out of it well,” Parker told Eurosport.

“Marcus Rashford scored a goal, and after that you’d have to say that Brandon Williams was the best player. Williams is only a young boy, and for some reason he can’t get regular football in that team. That tells you there’s something wrong at the club if that player can’t get regular game time. Williams should be playing at left-back every single week. He’s a young boy who’s done well every time he’s played. He’s had maybe one game where it didn’t go right for him away at Sheffield United. But then Solskjaer made changes – he went to three at the back and Williams was asked to play as a wing-back.”

“I’ve learnt from my own experience that when you have a young player who is doing well, you play him because it’s good for their confidence. It happened when Gary Neville came through and took my place. Sir Alex Ferguson said to me he couldn’t afford to leave Neville out because he’s done well and he didn’t want to affect his confidence. It’s the same thing now with Williams. He has to stay in the team.”

While Williams was one of United’s better players against City in the humbling Carabao Cup defeat and has made a blistering start to his career, it’s still early days. There is no doubt Williams has made an encouraging start but, due to his age and experience, we still expect to see mistakes and inconsistencies in his performances as he continues to develop.

But given the struggles of Luke Shaw, we wouldn’t be surprised if the youngster has established himself as a first-team regular already next season.