Ole Gunnar Solskjaer will make changes to his starting eleven as Manchester United return to Premier League action against Norwich on Saturday.

United remarkably still sit in fifth position in the league table, and could close the gap on Chelsea in the Champions League places with victory at Old Trafford.

Norwich, meanwhile, are all but doomed at the bottom of the table; Solskjaer couldn’t have asked for a better fixture to get back to winning ways after the humiliation against Manchester City in midweek.

But Daniel Farke’s side will come with nothing to lose and could cause an upset given United’s depleted squad and consistent struggles against the lower placed teams.

READ MORE: Opinion: Who Man Utd’s next captain should be as Ashley Young’s exit nears

We expect Solskjaer make tweaks to his side that was humbled on Tuesday evening, but wholesale changes can’t be made given the current state of the squad.

Scott McTominay and Paul Pogba are still sidelined with injuries and Harry Maguire remains a major doubt after missing the derby on Tuesday.

Maguire’s absence leaves United with a mini-defensive crisis with Axel Tuanzebe still not available. Phil Jones may have to start again despite a calamitous performance against City.

Anthony Martial came off the bench against City after recovering from illness and we expect him to return up front on Saturday. Nemanja Matic provided some much needed assurance to United’s midfield and he’s earned his place in midfield ahead of Andreas Pereira.

Meanwhile, Jesse Lingard was hooked at half-time and there is no way he can start against what will likely be a low block Norwich set up. Juan Mata was an unused substitute in midweek, and surely couldn’t do any worse than the players Solskjaer has been operating in the number 10 role of late.

While the Spaniard lacks a sharpness he once had, he is still quality on the ball and is more likely to create a goal or finish when given an opportunity. 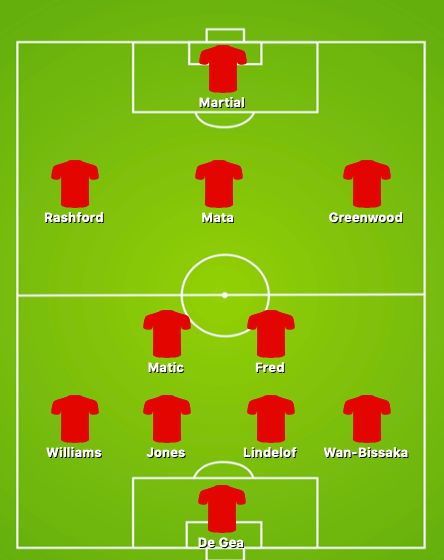