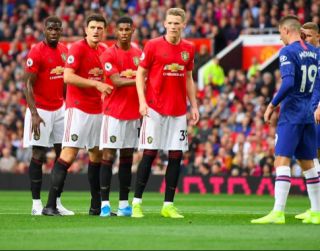 The fact that the 34-year-old was handed the captain’s armband this summer from the departing Antonio Valencia perhaps exemplifies the declining importance of captaincy, but it will be interesting to see who will lead the team next nonetheless.

Stretty News writers had their say on who should be made the next club captain at Old Trafford.

Perhaps not a choice fans can get excited about like Scott McTominay or Marcus Rashford – but in my opinion – the sensible one. Maguire is one of the most experienced members of Solskjaer’s squad but is also one of the first names on the teamsheet. United are a side that is lacking leaders, but in their £80m signing from Leicester City, they have an accomplished centre back who is vocal in marshalling the back four already. Maguire has taken the captaincy role on several occasions in Young’s absence this season and I don’t see any reason why he couldn’t become club captain. Marcus Rashford, Scott Mctominay and Axel Tuanzebe are all potential candidates fo the future but I have gone for the authority and reliability of Maguire this time round.

Only the timing came as a surprise. The news that Ashley Young is to leave United probably, if we’re honest, was a year overdue. It means that United lose their longest serving player and club captain. For me, Scott McTominay is the man to become Young’s successor. Harry Maguire has been given the armband on occasions but he’s not ready. McSauce is the man. The destroyer, central axis and string pulling creator-in-chief, McTominay carries the impression that he’s rather die for the shirt than lose in it. In a United side not exactly blessed for leaders, McTominay has continued to go from strength to strength and his importance to this side has only grown bigger in absentia. For Manchester United’s next captain fantastic, look no further than the man who models his game on one of our greatest ever.

Examining the landscape of the Utd squad at the moment is a sobering experience. Whereas in previous years, leaders stood out, it is not as evident today. It has been passed like a joint at a house party in recent times as no-one was able to truly prove worthy of the mantle. Sure there are a number of experienced players about. Matic, Young, Jones and Smalling for example. These are all set to leave or have uncertain futures though. Some would nominate De Gea but he is currently undergoing a difficult spell and it could weigh heavily on him. The mention of Pogba as captain would cause blood to erupt from some fans eyes.
So who else is there? Maguire is certainly worth a shout but possibly needs to really establish himself fully. Aaron Wan-Bissaka has impressed many and is definitely a candidate. Axel Tuanzebe has captained sides all through the underage levels at the club. He probably requires a full season or two injury free to set his case for it. Rashford is a good choice as a local lad but I am not personally a fan of strikers as captains.

However, it is another graduate of the youth set-up which gets my nod. Ander Herrera was believed to be the captain in waiting but Scott McTominay is already wiping clear the memory of his departure. He gives everything for the cause, drives others on in difficult situations, has added assists and goals to his game and understands the passion of the fans. Whenever he is absent, the midfield tends to struggle. He has even managed to build up a decent relationship with Fred. If trust in younger players is the message the club wishes to portray, then he would be the clear choice in my eyes.

As it stands, going into 2020 and beyond, it is very clear to see that there is no one player in this current United squad capable or worthy of the captaincy. Not one player over the past 6-8 weeks has shown the heart, consistency or quality we expect as fans and I don’t think its right to name the young boys, like Rashford or McTominay just yet, as they just haven’t shown the consistency of quality playing required to be honoured with the captains armband. I am not by any means one of the negative fans we see on threads and boards across the internet, and I stand by the Manager and his decisions to a certain degree, but things need to change in the Boardroom and in the upper-levels of management to truly reignite the spirit of Manchester United. A spirit that has been truly lacking over the past few years. We need quality players this window and next or else I honestly fear for the future of our club.