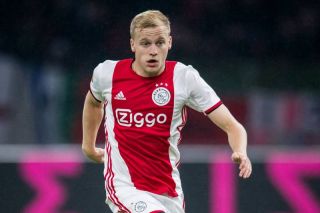 The Manchester United manager will need to push executive vice-chairman Ed Woodward to secure reinforcements for his squad this month.

Woodward can’t deny that the squad need works, especially the morning after watching us get absolutely battered all over the pitch by rivals Man City.

Solskjaer hints that he has been given a green light to make signings in January, but the United manager admitted after the 3-1 defeat against City that “if it isn’t the right thing, we won’t do anything” due to the club’s attempt to avoid making the same recruitment mistakes, which Woodward already has a lot to answer for.

ESPN now claim United and Solskjaer believe a deal could be done for Van de Beek this month as a result of Ajax failing to qualify for the Champions League knockout phase.

The 22-year-old Netherlands international was a key figure in Ajax’s memorable run to last season’s Champions League semi-finals. He is said to be valued in excess of £50m by the Eredivisie champions.

United desperately need an attacking midfielder, along with a right-sided midfielder, and Van de Beek would improve the current team. He’s also young enough to grow and develop further at Old Trafford over the coming years.

Van de Beek has scored 8 goals in 26 games this season for Ajax and Solskjaer needs a player in midfield who will contribute goals.