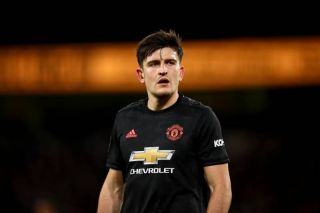 Ole Gunnar Solskjaer didn’t appear to have good news on the fitness of Harry Maguire tonight.

The Manchester United centre-back had a late fitness test ahead of Tuesday night’s Carabao Cup semi-final clash against rivals Manchester City, and it sounds like he will miss Saturday’s Premier League face off with Norwich City at Old Trafford.

Although Maguire has been guilty of shoddy defending this season, his absence was felt against Man City as we watched Phil Jones’ attempts at defending and almost injuring himself. To think he will miss another game — with the state of the current defence — would inflict a meltdown of some sort.

Maguire sustained an injury on Saturday as United came away from a scoreless draw against Wolves.

Solskjaer was hoping to have the centre-back available to face City but decided against doing so because the player wasn’t ready.

It will be discussed as a great goal, but Bernardo Silva’s opener from 25-yards may have been prevented if United’s defence ran quicker to close down the Portuguese star.

BBC Sport reporter Simon Stone tweeted Solskjaer’s response to a question about Maguire stating that the injury should not keep the defender out for long, but he’s definitely ruled out of the match versus Norwich.

OGS on Maguire absence: “Don’t know. Not long term. Not ready for the weekend.”

Best of luck to Solskjaer trying to assemble a defence for Saturday.