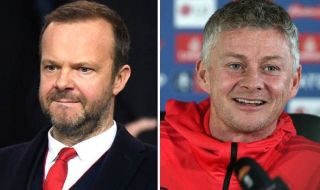 So here we are again. Not even one step forward to have two steps back.

Not even back to square one as it feels like we have fallen further.

A stark reminder last night (if we needed it) that we are light years behind Manchester City. Of course we all knew that but when you see the way the blue half of the city pass and move the ball you can’t help think, how far does this club need to fall before we aggressively (that’s what’s needed) do anything about it?

How are we meant to give Ole time for his direction to be realised when so much has been taken away (Herrera and Lukaku) and not been replaced. How can nearly everyone fan and non fan see what the problem is and the club seemingly not?

The squads deadwood, we know who, has rotted away but still seems to keeping itself afloat at the club.

It is time to stop blaming those individual players who make a living at this club. We know, and I’m sure they do they too, that they are not good enough. It is not their fault the club continuously rewards their mediocrity. You and I would take the contacts they are being offered and the chance to carry on playing for Manchester United.

Why would anyone be Ole out when you can see the same squad will be inherited by another manager? The results won’t change.

I hate to say it but Liverpool has the best recruitment team in the country. Hit after hit after hit. Some positions needed improvement and they spent the money on those positions. Look at the results. You are always taking a chance buying any player but you have to commit to taking a chance.

United are reportedly looking for ‘the right player for the right price.’

The right player will be available if we pay the right price.

If that isn’t the case then find a player that is. You can’t just go after unattainable targets either. If the rumours are true then it seems like James Maddison or Jadon Sancho could be those players but are they realistic?

Who would want to play for this team now?

How long will that carry any weight when a lot more clubs in the same league are run better than United?

From the outside in it looks like a shambles and Ole is the front man to a useless backing band.

I liked the signings we made in the summer. I honestly think those needed to be done and have, on the whole, worked. I know Harry Maguire gets a bit of criticism but that midfield in front of him has been too weak. Daniel James has looked tired of late and as a result his performances have deteriorated. Up until then though he has been one of our best threats going forward. James has also probably had to work a lot harder than expected and his enthusiasm to do so may have added to his tiredness.

Aaron Wan-Bissaka has been a welcome addition, a steady influence and will improve. He is an obvious upgrade on what we had available last season.

The squad needs investment. It’s the only way we can improve now. The youth have been given a chance and we can clearly see who is going to part of the squad from now on.

If United can’t go through this transfer window and not find anyone who can improve this squad then what is really going on?

Poor planning again could lead to no signings or a panic signing.

Whoever is in charge of recruitment or is part of that process should have already chose who they are going to sign.

Let’s face the possible awful truth, the club is just looking like they are busy trying to sign players. They have no real intention of buying anyone. The cycle continues and more misery awaits.

So many games this season have exposed our threadbare squads weaknesses. Injuries have not helped but those injuries have shown the same thing as the defeats.

Last nights defeat hurt. City swaggering their way to victory over the Reds home turf. They played the type of football that seems so far out of our reach.

When it’s all said and done the buck stops with manager. The club is more happy making money than spending it and ultimately we know who will pay the ultimate price.