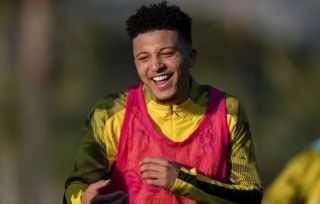 Borussia Dortmund are adamant about keeping Jadon Sancho in January, according to Sky Sports in Germany.

The England international has been linked with a move to Manchester United among other clubs, as reported by The Express, but has no release clause in his contract that keeps him at Dortmund until the end of June 2022.

BVB are right in thinking they would not find a suitable replacement for Sancho in this transfer window but it comes at a loss for Man Utd.

However, after landing Norwegian striker Erling Haaland you would think they have enough attacking players to cash in on Sancho halfway through the season, if the player did want to leave now.

Ole Gunnar Solskjaer is crying out for a midfielder or two who will bring more goals to his team. Although Daniel James showed promising signs at the beginning of the season, he now looked tired and is in the process of adjusting to top-flight football.

Sancho is only 19 but has a higher ceiling in terms of potential. It’s the sort of signing that could make a difference in United’s attempts to clinch a Champions League spot this season.

But the signs coming out of Germany are that BVB will not sell the England winger in January.