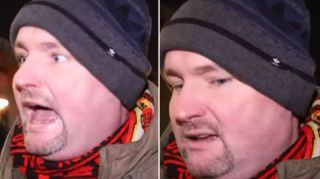 Andy Tate has unleashed one of his trademark rants following last night’s defeat to Manchester City.

United were three goals behind at half-time but Marcus Rashford pulled one back in the second half. It wasn’t enough and now the Berties take a two-goal advantage into the second-leg.

Ole Gunnar Solskjaer’s side were abysmal throughout and nobody can blame Tate for being furious at full-time.

Speaking to presenter Adam McKola, Tate addresses Ed Woodward after cameras went on the director box during the game.

The spotlight is rightly shone on Woodward. He’s mainly at fault for the problems we’re now seeing after years of terrible decision making.

He also puts down senior squad members such as Phil Jones and Jesse Lingard for their lack of leadership, but United didn’t have a single leader on the pitch last night.

Marcus Rashford was captain but I’m not sure if he’s cut out for that. Still, it’s to his credit that he’s thriving at this club right now. It shows serious mentality!

Tate states that Lingard could have signed his own ‘death warrant’ in relation to his United future.

Rumours have done the rounds about Lingard partnering up with super agent Mino Raiola and that AC Milan are interested in his signature.

Tate ends his rant with admiration for Mason Greenwood and Brandon Williams, who performed better than the rest against City.

“The younger players are putting the older players to shame, it is what it is.”