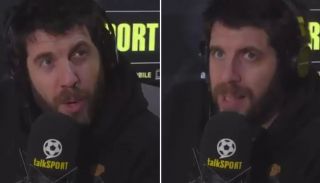 Radio presenter Andy Goldstein delivered a passionate rant about his beloved Manchester United last night and we think fans will agree with every word.

Man Utd suffered a 3-1 beating at the hands of arch rivals Man City in their Carabao Cup semi-final first leg and were second best for most of the game.

United fan Goldstein was on talkSPORT after the match and gave his thoughts on the current state of the team.

He goes on to explain he expected a slump following the departure of Sir Alex Ferguson, but never imagined it being this bad.

Goldstein also touched on January transfers with a rather downbeat demeanour.

It’s a sentiment that is echoed here at Stretty News.

United are light years behind their rivals and we have no confidence whatsoever in the owners or Ed Woodward, who see the club as a commercial cash cow — nothing else.

Watch Goldstein’s heartfelt rant about United below via talkSPORT:

“This team is a million miles away from getting close to where they were.”

“We are in a world of trouble!” 🤦‍♂️@AndyGoldstein05 opens the show with an emotional #MUFC rant 👏👏 pic.twitter.com/hVZdIEsFKz